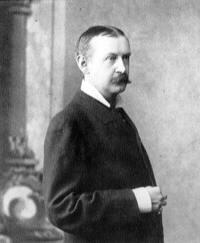 One of the most prolific and commercially successful American landscape painters of the late nineteenth century, Edmund Darch Lewis rendered crisply realistic images of shorelines, waterways, and rural scenes in the northeast that received popular acclaim during his era.

Lewis was born in Philadelphia. At age fifteen, he began to study art, enrolling in a private class with Paul Weber. His initial works were landscapes and marine views, focusing on the Lehigh, Susquehana, and Wissahickon Rivers of Pennsylvania. These paintings were described in the Philadelphia Public Ledger as demonstrating “a tremendous talent, great freedom from tradition,” and they “promised a departure from the beaten tracks.” (1) Lewis’s art was in high demand from the beginning of his career and he established a national following.

Although he became best known for scenes of Philadelphia, Lewis also rendered views of New York, New England, and even Cuba. Later in his career, his focus shifted to shorelines of Cape May, New Jersey, and Narragansett, Rhode Island. He frequently depicted schooners drifting in calm waters, churning mills, and hidden cottages. Lewis favored watercolor, but also used oils and gouache.

Due to his financial success in painting, Lewis was able to nurture his passion for collecting. He would often trade a group of his watercolors for valuable objects d’art. His collection included a throne that belonged to Napoleon I, a set of drawing room furniture from the Borghese Palace in Rome, and the original sketch for Alexandre Cabanel’s Birth of Venus. His mansion in Philadelphia consisted of two connecting houses and additional annexes that were filled with period furniture, china, and decorative arts. Wealthy and admired, Lewis entertained in a grand style, hosting a number of exhibitions and events in his opulent home.

There are no reviews yet.

Only logged in customers who have purchased this product may leave a review.